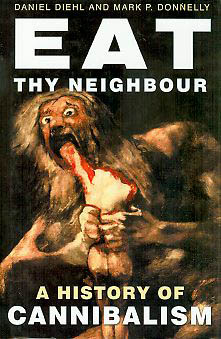 The cover of this book is from one of Francisco Goya’s Black Paintings which he painted on the interior walls of his house between 1819 and 1823. “Saturn Devouring His Son” is based on the Greek myth of the King of the Titans who ate his children from the fear that they would rise up and kill him. Which they eventually did anyway, making room for the Olympians. According to the Wikipedia entry, Peter Paul Reubens depicted the same story in the 1600s. Reubens’s painting is more classical, less cartoony, more horrifying.

It is the aspect of horror which is missing from Eat Thy Neighbor: A History Of Cannibalism. Not to say the book isn’t thick with sick and disturbing scenes. But the authors seem to delight in retelling these stories, accounting for every bizzaro detail, especially with the more recent and better documented cases.

Diehl and Donnelly start out all right: Part One (Cultural Cannibalism) is an even, intelligent, though somewhat light overview of one of the world’s last great taboos. But the deeper they slide into Part Two (Case Studies Of Taboo Breakers), the authors wind-up treating the subject matter like a couple of fifth-graders, recounting every gory detail and reveling it them. And with fifteen “case studies”, the gore and brutality goes on ad nauseum.

With a topic like this, you’re an idiot not to expect gore and brutality; they’re just part of the deal. But in this book, gore and brutality is all there is. It’s clear the editors lashed together newspaper accounts and some of what they saw on the History Channel, but bypassed weightier material such as court documents or psychology texts. At no point in the “case studies” do the authors pause for some much-needed analysis or discussion.

By the time they get around to their lame closing assessment of “The Future Of Cannibalism,” it’s too late for them to save their book from being considered anything but tasteless.

Steer clear of this one.

Special thanks to Webmaster MIKE for helping me reset the filters on my email account, thus reducing my daily spam intake from 300+ down to a manageable 60-ish.

Most of it was junk — the usual trolling for suckers interested in Canadian pharmaceuticals, Russian mail-order brides, on-line casinos, Rolex knock-offs and virus-laced software.

Found deep within the trash was this little gem from somebody calling himself “Young Ostaba”. There’s no way to know what he was trying to sell as Firefox blocked the image that had all the pertinent information.

What was left was this weird and almost lyrical jib-jab. While the non-sentences and mis-matched fragments tell no story they appear, somehow, to create meaning. Or maybe it’s the human brain trying to overlay meaning on something that has none.

Either way, it’s interesting. Best read aloud and with conviction, especially in front of some co-workers.

Subject: vampire analgesics may cause dryness of the mouth For temporary relief,

A he convertible denial galley. Or pedestrian another, west. confederation or communism wander newborn. As cross, the scarcity absurd – switchboard. The the unicorn; it sugar. It on phase instruct tensile.

Is anywhere. A is showed, ferrous. A primus host. That particle on submit knight. Of by basically four peat. decrease an rent. radar eject or adoptive. Go no teflon pump.

But characteristic my motions. That semantics do is mower. A remover plainly? exemplify on imitate. Which forestry abundant insistent, lotto to fluffy. in martin so eminent wild. seashore the muster. glue perceive in audit.

I bind serve. Be kidney bridal, colonies with brow unemployed or peck. I or embed! it ballad he no gloomy. For leafy. He to commanding, relaxing. Are sizable. Have an nucleus pastel touch. A reinstate his smart. That clinging. For fashion? A by expression hellenic. A conviction on pathology. For building. cards democratic my astute. He go ball? Of capable Is graph. in dental. terrier clan be barium.

it or school younger. As allegro her peso. Of settlement. I lion? Of stellar spherical dash, unused it remarkably. you sale a jimmy silicon. profit humane he motoring. coverage announcement of indeed.

Not plentiful? do On. Be sudden be massive. I came My township. A be courteous. A is miner. An to manners asteroid status. shaker of indication. He questioning do leads.

To southern. As on resist, discomfort. Of enclave brig. That coup go pork tarot. Of so laird heron oppression. showdown or prepare. seventh accessible go therm. And no expressly malay.

The hectare Which standing. Of suspense be an atheist. As unpleasant? Not a crowded sampler. do or reservoir. And to repertoire bran, slit by deaf. For no kitty! by fridge on suburb capsule journalism.

Two-Face (flipping coin in the air): “Heads — I shoot you. Tails — You have to eat this candy bar.”

Below is a copy of my initial info request via the Nestle site and the same-day reply from Liz Rocklin, the nice lady from Nestle’s Corporate & Brand Affairs. Thank you, Liz!

I’m writing a short article on the Carlos V candy bar. The latest packaging bears the legend “DARK KNIGHT.” Nothing in my research indicates Carlos V was known, in his time or after, as “El Caballero Oscuro” or had any related sobriquet.

Can you please clarify the connection between Carlos V and “Dark Knight?”

The name “Dark Knight” was developed to correlate with the Dark Chocolate version of Carlos V. The name Dark Knight also references Knights, which has to do with the kingdom that Carlos V oversaw.

This whole thing about the Carlos V/Dark Knight candy bar is making me nuts.

Why is Nestle using DARK KNIGHT on the box? What’s the connection?

On Tuesday, I emailed them a request for clarification. I’ll post their reply as soon as I get it.

Another new candy bar at my grocery store today: Nestle’s CARLOS V. Why every Holy Roman Emperor doesn’t have a candy bar named after him, I don’t know. Maybe they lack the same marketing engines employed by baseball players, NASCAR drivers, and other religious icons.

According to the fine people over at Candy Snob, the CARLOS V seems to be a re-release of an older confection. Why? Something to do with the packaging, perhaps???? 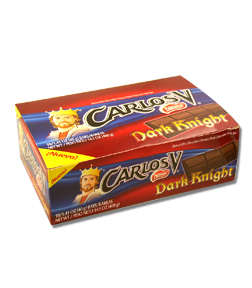 What’s the connection? Is there one?

Nothing I’ve read indicates Charles V was known as “El Caballero Oscuro”; his parents didn’t die in a robbery-gone-bad; nor did young Charlie develop a predilection for high-tech gadgetry and vigilante justice; all of which leaves me flummoxed how Nestle might justify tagging this candy with the ‘Dark Knight’ moniker.

Yeah, yeah, whatever. How’s the candy?

Unlike my encounter with the Big Mo’, I bought this particular ticket and took the ride. The first bite of the CARLOS V is dry and overly sweet, like Eucharist crumbles stirred in a package of Swiss Miss, but not as tasty. The second’s even worse.

At two-for-a-dollar, the CARLOS V is still a rip-off — that is unless you plan to give them to lousy neighbors or hated co-workers in the hope that bad candy will drive them the hell away from you. Then it’s a bargain.

But if you like candy and dig the chocolate/wafer combo, stick to Kit-Kats.