As part of the ongoing research for FLotU78, I’m reading When The Going Gets Weird, one of the (many) bios about Hunter. Here is Peter Boyle’s reaction when he met HST while filming Where The Buffalo Roam:

On the coffee-shop patio of Universal Studios, Boyle found the forty-two-year old Thompson finishing lunch . . . Hunter consumed a club sandwich with a couple of beers, and then ordered chocolate cake and a double Wild Turkey. What kind of creature do we have here? was Boyle’s immediate thought.

And my immediate thought was: What’s the problem?  Sounds like a pretty damned good lunch.

Every day I cruise the posts at Dark Horizons, one of the best movie news sites on the ‘net. There is the occasional item buzzing about non-events,  but Garth tends to keep the reports straight —- unlike the hyperbolic fanboy bullshit from AICN.

Today, I watched the extended clip of RANGO, the new Nickelodeon/Paramount Pictures cartoon starting the voice work of Johnny Depp, Ilsa Fisher, Bill Nighy, Alfred Molina, and Ned Beatty. Then I watched it again, just to make sure and, yep, looks like a less-than-sly nod to our good Dr. Thompson.

(The video is an MSNBC exclusive, so I can’t imbed it. Click here to watch the clip.)

Film School Rejects though the same thing back in June of last year. Guess I’m a little slow on this one.

Tardy or not, the connections are undeniable: Rango’s lurching gait, Acapulco shirt, speech patterns, and the outrageous detail of his story — along with his aggressive control-the-situation-before-it-takes-control-of-you approach to dealing with the mangy gang in the bar — all seem to add up to a good-timey Gonzhomage.  Add to that some voice work by longtime HST pal Harry Dean Stanton, the overall physiognomy of Rango’s face, and a room full of lizards(!) — and it’s hard to not to watch this clip with Gonzo eyes.

I’m trying to talk the wife into going to the show tomorrow night. She says maybe, but I might just smuggle the kid out of the house, anyway.

If you’re looking for a complete bibliography of the good doctor’s works, there’s no better place to start than HSTbooks.org. (Make sure it’s .org ; .com belongs to a North Carolina college bookstore site — GO WOLFPACK!)

Marty Flynn, the site’s writer and editor, cops to being  ” a fan of Hunter Thompson, I’m also a proponent of keeping his memory alive . . . .” To be expected from someone who’s been posting Hunter-related news and reviews since June 2008. He’s compiled a mine of information. Go spend an hour clicking around the site. Marty’s conscientious, through and, detailed. He’s even got a buying guide for collecting HST books.

Well done, Marty. And thanks.

(Never tell me, by the way, that the dead look peaceful. Most of the corpses I have seen looked devilish.)
— George Orwell, “Shooting an Elephant”

A couple of weeks ago the wife, then kid, and I went to Chicago’s very own John G. Shedd Aquarium. If you haven’t been there in a while, you owe yourself a trip. If you’re an out-of-town reader and you come to the Windy City, an afternoon at the Shedd needs to be on your itinerary.

While there, if you find it necessary to heed nature’s call, you’ll find these in the bathrooms: The Digital Washroom Advertising System by Impressionaire. 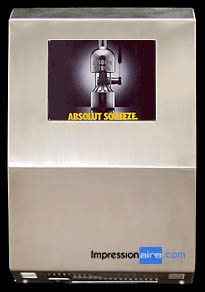 The viewer looks at your ad while drying hands in a venue that is free of traditional advertising.

I have to admit, it’s a clever and well-executed idea. But, while curiosity makes me wonder about advertising costs and administration, I can’t help but be annoyed that I’m forced to endure commercials in the bathroom. Is there no escape?

Has anybody run into these hand dryers elsewhere — in the US or the world?