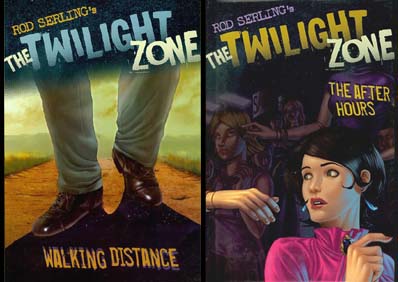 The Savannah College of Art and Design has taken the time and trouble to do something no one has previously attempted: adapting original Twilight Zone scripts to comics.

While there have been a number of earlier comic book incarnations of the seminal TV show, none could be considered faithful translations of Rod Serling’s screenplays. Many of The Twilight Zone episodes themselves are missing elements that didn’t make it from the page to the small screen –– lines, scenes, or characters edited or eliminated for running time or budget, or their provocative nature possibly troubling the sponsors and viewers.

These missing pieces –– the excised, the overlooked, the unexplored –– were what SCAD Professor of Sequential Art Mark Kneece (Hellraiser, Batman:Legends of the Dark Knight) found in each show’s original screenplay. From these pieces, Kneece et al were able to construct a “director’s cut” of the eight episodes selected for this graphic novel series.

The first two books, “Walking Distance” (original air date 10/30/1959) and “The After Hours” (original air date 06/10/1960), are based on scripts from the show’s inaugural season. While not the most startling episodes in the canon, they are fine examples of Serling’s writing for the show, especially “Walking Distance,” which many consider to be his most personal Twilight Zone script.

Kneece’s reverence for The Twilight Zone and Serling’s writing is clear. There is a certain amount of awe in these adaptations, a feeling that he and the SCAD team are fully aware they walk in the deep and still-reverberating footsteps of a giant. They are honored to work with this material and strive to convey Serling’s full vision while keeping themselves as unobtrusive as possible.

Thus, despite the show’s reputation for the weird and surreal, the SCAD production team kept their line work, coloring, and font choices restrained. Instead of bringing the stories into the modern era, each is told in its original setting with props, hairstyles, and costuming apropos of the time in which the screenplay was written (e.g., Martin Sloan’s narrow lapels and skinny ties in “Walking Distance”).

Also emulating the show’s production period (1959 to 1964) are page composition and character positioning within the panels. While “The After Hours” has the occasional floating/overlapping panel, overall both books consciously reflect the shooting style of 1960s television.

Kneece, his artists, and production teams have done a meticulous job adapting Serling’s vision to the comics form and bringing to life something that may not have been realized, or realizable, in another medium.

As noted earlier, a total of eight graphic novels are planned. Two more Twilight Zone graphic novels arrive this December: “The Monsters Are Due on Maple Street” and “The Odyssey of Flight 33”.

Rod Serling wrote more than half of The Twilight Zone’s 156 scripts. It will be interesting to see the ways each artist approaches the material and which stories Kneece has chosen to round out this series.