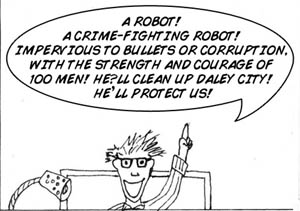 Click the above link to see the first couple of installments in the Avenge-O saga.

The first story, “Forging of a Hero,” was written and drawn (by me) in 1999. It was supposed to be part of Supermarket Action!, a compilation showcasing the work of each Fine Arts Guild member. The conceit was every story had to take place in, or do with, a supermarket or grocery store.

It was a great idea. Unfortunately, it suffered from the same fatal defects encountered on most group projects and was never published. I don’t know if any of the other FAGs finished their parts. Not that it matters now.

Anyway, Part Two, “.38 Caliber Discount”, was written by me, too. I did a version with art for the book. In 2005, I headed to San Diego’s Comic Con International in search of an artist to work on a larger (awesomely good) Avenge-O script. I met cartoonist and industry inker Jorge Pacheco. He did a great job on these three pages. We’d planned to work together more, but he got married and had a kid, so that fell through, too. 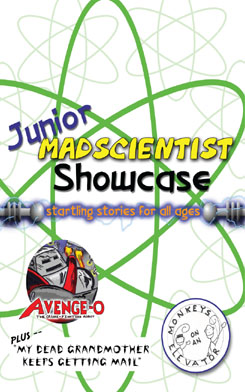 Other stories in this issue include “My Dead Grandmother Keeps Getting Mail,” an installment of “Monkeys On An Elevator”, and Parts I-III of “TOPOR: THE THING THAT SLEPT!”

I think there are still a few copies around. Anyone interested in a FREE! SIGNED! book, drop me a line in the comments section. I’ll give ’em away until there ain’t no more.