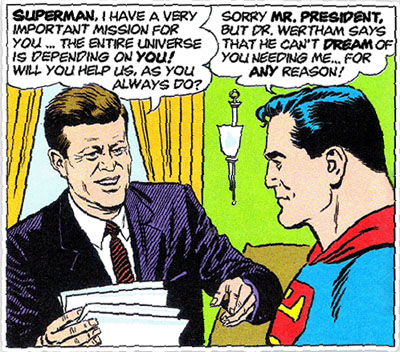 (image courtesy of Dial B for Blog)

(update April 13, 2010: had do disable comments on this because of the massive amounts of spam. If you have something to say about this post or want to add to the discussion, send me an email via the ABOUT page or comment on another post and I’ll transfer it over. Thanks. bjw)

Stopped by The Church Of Shiny Objects blog the other day, just to see what my pal Varney’s been up to.

Chris turns a good phrase, lately in the service of movie reviews, sports commentary, and other pop culture consumables.

Wertham is well on his way to being utterly forgotten . . . . we should do nothing to slow that course from finishing itself out.

And I’m thinking that’s not such a good idea.

To quote the oft mis-quoted George Santayana: Those who cannot learn from history are doomed to repeat it.

Never mind the inability to learn one’s history. Deliberately allowing it to be ‘utterly forgotten’ is an even surer ticket to Doomsville.

The man was a respected psychiatrist responsible for a number of innovations. Per Wikipedia, “Wertham absorbed the then-novel idea that environment and social background had major effects on psychological development.” Radical stuff for the early 1920s.

Later, his work with criminally violent children lead him to conclude a strong and demonstrable connection between behavior and violence in the media — movies, radio shows, pulp novels, and, yes comic books.

Does this sound familiar? All we need do is add heavy metal music, TV, and video games to the list and it’s the same argument we’ve been embroiled in for years.

Regarding Wertham’s vilification of comics, his big problem is that he settled on a single cause for juvenile delinquency. There were many factors beyond comics to account for American juvenile delinquency in the late 1940s and early 1950s — one of them, I posit, is the effects of the extended absence of fathers/father figures during the War years, WWII and Korea. For roughly twelve years, various Dad’s were off fighting, Mom’s were working, and the kids were allowed to roam free. Left to their own devices, is it any wonder more than some of them got in trouble?

I’m not a Wertham enthusiast or defender of his ideas on comics, which ranged from spurious to nutty. The thing is, Wertham was trying to find an answer to what he saw was a real problem. Saying he should be “utterly forgotten” is like saying we should forget Alexis Carrel: another somewhat nutty doctor (scientific racist, believed in physiognomy, the need for eugenics, etc.) whose ingenious medical work allows us to perform organ transplants.

It’s like saying we should summarily forget the other nuts, of various stripe and swastika, looking for answers to societal problems. By forgetting them, we forget the lessons they taught us, both good and bad. That is, if we learned them in the first place.

The behavior of older Americans during the comic book scare more than suggests they wanted what Wertham said to be true. (Book burnings, anyone?)

Parents, teachers, priests, and Congressmen — people who didn’t read or understand comics and hated the fact that they were everywhere, bought into Wertham’s anecdotal ‘proof’ that comics were bad. It fed into the American culture of fearing non-uniformity. And, in the 1950s, what better way to show we were doing something about the problem than to form an Senate committee and televise the whole show.

But the thing about the Senate Subcommittee on Juvenile Delinquency is that it ruled comics were NOT responsible for crime or juvenile delinquency .

So who is really to blame for the sorry and sordid history of the US comic book insdustry, 1954 to current?

As noted in Heer’s article, the industry became “severely restricted by a self-imposed code that prevented comics from publishing anything but the most anodyne kiddies’ fare.”

So, the publishers, lacking any hint of spinal integrity or testicular fortitude, jumped on their swords by creating the Comics Code Authority themselves! For political (i.e., financial) reasons, they decided to censor their own works. They forged the gun, made the bullets, loaded the weapon, put it to their own heads and pulled the trigger. All this on the heels of William Gaines’s flippant and disrespectful testimonies. (As I recall from my readings) Gaines was the main man on the stand, his books the ones displayed most often as evidence for Wertham’s arguments. Gaines couldn’t be bothered to take any of it seriously, to the industry’s lasting detriment.

Clearly, anyone holding up Wertham as the one-and-only bad guy in this fiasco is making the same simplistic and fatal error Wertham did. Catherine Yronwode, (as quoted by Heer) “a popular historian and comic-book fan,” is less-than-correct when she states, ‘He [Wertham] and he alone virtually brought about the collapse of the comic book industry in the 1950s.’

Along the way, I couldn’t help but wonder if Chris had read Seduction of the Innocent. While ham-handed on the whole COMICS=EVIL thing, Wertham did make some significant points regarding media’s influence on children. It’s an interesting historical text and certainly deserves of a portion of a comic fan’s reading time. Especially since it’s so often referenced, vilified and spit on by comics fans.

Heer’s article has a nice balance to it not generally found in any discussion on Wertham and comics. His’ wrap-up: “If he had paid more attention to comic books, Wertham would have realized that he was following down the path of villains like Lex Luthor and Dr. Doom, who start off with good intentions only to become prisoners of their own blind arrogance.”

The same is true for those who want to want to completely write-off Wertham and be done with him.