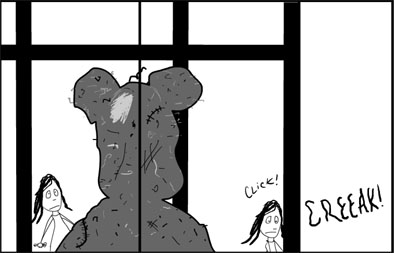 Some teaser art for the forthcoming NOBLE FAILURE #9.

The pages for the September attempt at a 24-Hour Comic are progressing, but slowly, slowly.

The hang-up has to do with working on the computer. The vector graphic program/drawing tablet combo are getting easier to use, however, I find myself tinkering with individual lines for long, long minutes to get the angle of an arm or just the right bend in a word balloon’s tail. I keep telling myself, It’s a word balloon! Let it go! but the program’s 2000% zoom and the ability to infinitely monkey/un-monkey with lines only feeds my compulsive compulsion to obsessively-compulse over every detail until it’s right. Right? RIGHT?!?

Well, that’s my neurosis, not mine (or mine), and clearly defeats the point of a 24-Hour comic.

But I’m happy with the eight pages done so far. It’s not often I can say that about my own work, so that’s at least something.

The wife and kid are off to Minnesota for a long weekend, leaving me here to work on more comic art and to pound away at a middle grade sci-fi/adventure/comedy I’ve been wrestling with.

I wonder which I’ll finish first.