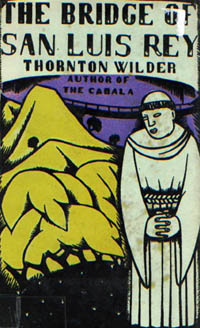 “On Friday noon, July the twentieth, 1714, the finest bridge in all Peru broke and precipitated five travellers into the gulf below.”

So starts THE BRIDGE OF SAN LUIS REY, one of the finest books in the English language. (Thornton Wilder’s “faintly contemptible vessel” earned him the 1928 Pulitzer Prize for literature. Wilder was 31 years old. THE BRIDGE was his second novel. The son of a bitch.)

Today — today exactly– marks the 293 anniversary of the fictitious rent, but how often can it be celebrated like this? On the precise day, date and hour?

The last time we could have done so was in 2001, an interesting year for Wilder’s story. Not only did the dates coincide for the bridge, the story was used to commemorate collapse — the September 11th felling of the Twin Towers.

“But soon we will die, and all memories of those five will have left earth, and we ourselves shall be loved for a while and forgotten. But the love will have been enough; all those impulses of love return to the love that made them. Even memory is not necessary for love. There is a land of the living and a land of the dead, and the bridge is love. The only survival, the only meaning.”

Mr. Blair’s reading resulted in a well-deserved “rediscovery” of THE BRIDGE and Wilder’s other works.

THE BRIDGE OF SAN LUIS REY is not an easy book. Wilder never comes right out and tells, “Why these five?” There’s a lot to get from it and it is worth repeated readings, or listenings of Sam Waterston’s excellent performance.

Even if all you get from it is that last bit, about “the bridge is love,” then you’ve got a lot more than you had before.

(click here for more on THE BRIDGE OF SAN LUIS REY)