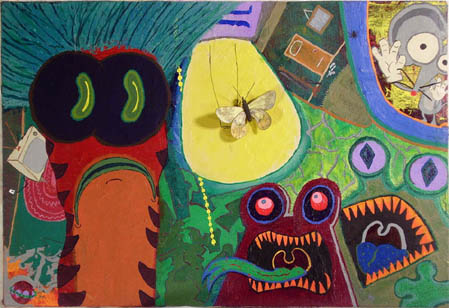 There was no plan for this piece. I made a frame, stretched some canvas and started gelling on pieces from a discard copy of J. D. Salinger’s RAISE THE ROOF BEAM HIGH, CARPENTERS. When it became clear that was going nowhere, on went some paint.

It almost stopped with the lightbulb, but something was missing. Why would all eyes in this painting be staring at lightbulb? (And what is it with me and monsters, anyway? Sheesh.)

Bruce mentioned a trick he learned at college: if a painting is giving you trouble, look at it in a mirror. Seeing the work in a different way might make the problem clear.

And damnit if that didn’t work.

Something needed to be ON the lightbulb. Not painted on. Sitting. Something 3-D.

There’s no way to know now where the butterfly idea came from. Once it was there, though, I took something like two weeks to find the right one, then another week or so to build it out of balsa wood, wire and watercolor paper. It has little legs and a curled proboscis, too, though you can’t see any of that in these pictures.

The Parnassius Autocrator may not be the most striking butterfly on record, though the little butterfly biography gelled to the backside of the canvas says it’s one of the rarest, which is probably why it got chosen for this painting.

Only a very few collections possess a specimen of this rare and much sought after butterfly. In 1911 a single specimen was captured at Darwas in Western Pamir. The species remained unknown for almost a quarter of a century until it was rediscovered in 1936 by the adventurous collecting expedition lead by the well known entomologist Dr Hans Kotzsch, of Dresden. Dr. Kotzsch and his wife, who accompanied him, were able to capture several specimens of both sexes. The males are much rarer than the females; it is the only Apollo Butterfly in which the female has a large yellow spot on the hind wings. These butterflies fly with an elegant sailing motion above rocky gorges and chasms.

The one on the lightbulb is supposed to be a female.

The picture of the real Autocrator was borrowed from Waldek’s Parnassius Of The World website. Waldek says that most of the photos from his site are from his personal Parnassius collection, which is amazing. It takes a few extra seconds to load, but stick around. It’s worth the look.