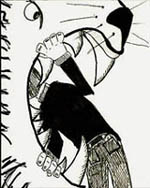 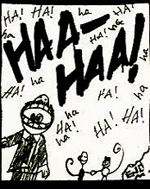 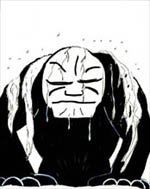 Installment the third of my monthly attempt at a 24-Hour Comic. The page count fell this time around: only eleven, plus the cover. But they’re all quality.

Some people (who shall remain nameless, but you know who you are) suggested I forget the covers and concentrate on page count. An understandable argument, though I can’t agree. Even if I was near finishing in the prescribed time, that last page would still get sacrificed for a cover. There’s something sad and incomplete about a coverless comic.

exemplum gratis: Somewhere in my collection (currently in storage or I’d scan it) is a copy of INCREDIBLE HULK #181. 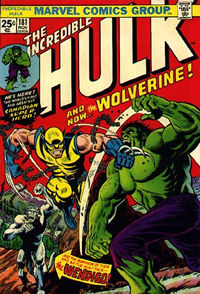 For those of you not in the comic book know, this is the first appearance of Wolverine — one of the industry’s most popular (i.e., $$$$$$$$$) characters .

You may remember this guy 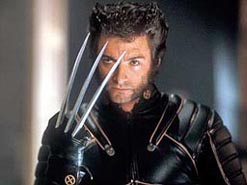 from such films as X-Men, X-Men 2: The Revenge, or Swordfish as plain ol’ Hugh Jackman.

Before it came my way, somebody colored the masthead with green crayon and cut the small Hulk circle out of the upper-left. Then he proceeded to bend, fold, spindle, mutilate and otherwise defile the rest of the book.

The point is: mournful though it may be, it’d look downright tragic without a cover.

Anyway, that’s my cover story and I’m sticking to it.

Other items of note for #3:

(Apologies for the large type on the bullet points. It’s probably something in the default formatting. I’d fix it except Web Master Mike has forbidden me from even looking at the code. There was a lot of swearing and something about chopping off my hands. So, no touch-y.)

I’m still tinkering with the image sizes, trying to find the ideal pixel count for your viewing pleasure. Meanwhile, click as always on the thumbnails to get a bigger image, then mouse over the picture. If a magnifying glass appears, click again. The image should get a bit bigger and easier to read. This will be handy for “Monkeys on an Elevator” and the letters page.

As always, your comments and suggestions are welcomed.

Next week, NOBLE FAILURE #4, a book review, and maybe a few other surprises.