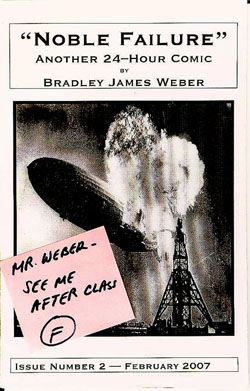 Ah, yes. Scans for my mythical second attempt at a 24-Hour Comic. The February edition has more content — 16 pages, plus this snappy cover — though the overall tone has taken a dark and brooding turn.

There’s blood.
And some swearing.
And a couple of dead bodies.
And monkeys.

In fact, unless you’re 18 or older, or have expressed written consent from your parent(s) or legal guardian, it’d be a good idea to skip February. Don’t say I didn’t warn you, kids.

IMPORTANT DISCLAIMER: The events in this comic do not in anyway reflect my emotional state, then or now. I am not, nor have I ever been, suicidal. I don’t believe I am friendless or that my family has abandoned me. It’s just a story.

That being said, I DO believe those rats at the International Astronomical Union poked a dirty stick at Pluto.

As always, your comments are welcomed and encouraged.